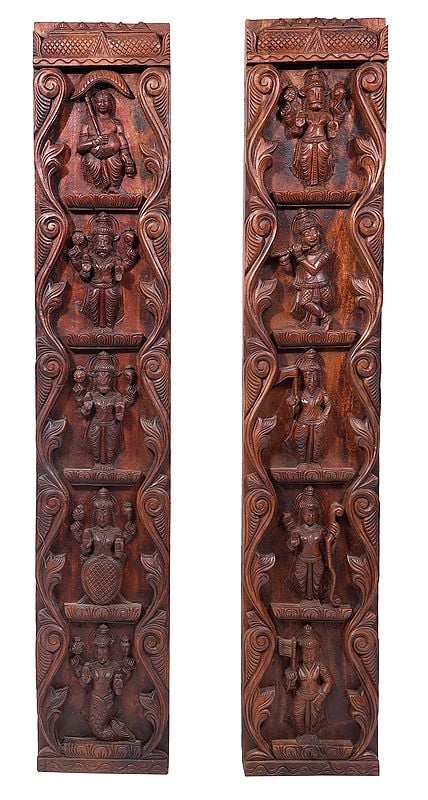 The generous Lord Vishnu has descended upon ihaloka (the mortal realm of existence) no less than ten times. Each of those occasions have been a turning point in the prevailing yuga. The ihalokiya presence of the Lord has been characterised by the indubitable annihilation of adharma and a systemic reiteration of dharma in the world. These incarnations are a manifestation of Vishnu’s role as the presiding deity over preservation.

The sculpture that you see on this page comprises a pair of vertical panels made from wood. On each of these panels are carved miniscule figures of the dashavatara. Dashavatara is a portmanteau of the Sanskrt words dasha, which means ten, and avatara, which means incarnation; and is almost exclusively used to refer to the Vishnu-roopas. In the panel pictured leftwards, from the bottom up there are Matsya, Koorma, Varaha, Narasimha, and Vamana. In the right one, there are (in no particular order) Rama, Krishna, Parashurama (portrayed twice), and Kalki (yet prophesied).

A monotone gradient characteristic to wood characterises both the panels. It makes for a solemn tone set by a work of art. The lotus plinths beneath the feet of each of the avataras serve to demarcate the space accorded to each. Elongated waves of vine run down the vertical edges of each panel. A great deal of detail has been introduced to each figurine despite the scale on which they have been carved, which is a hallmark of superior workmanship.