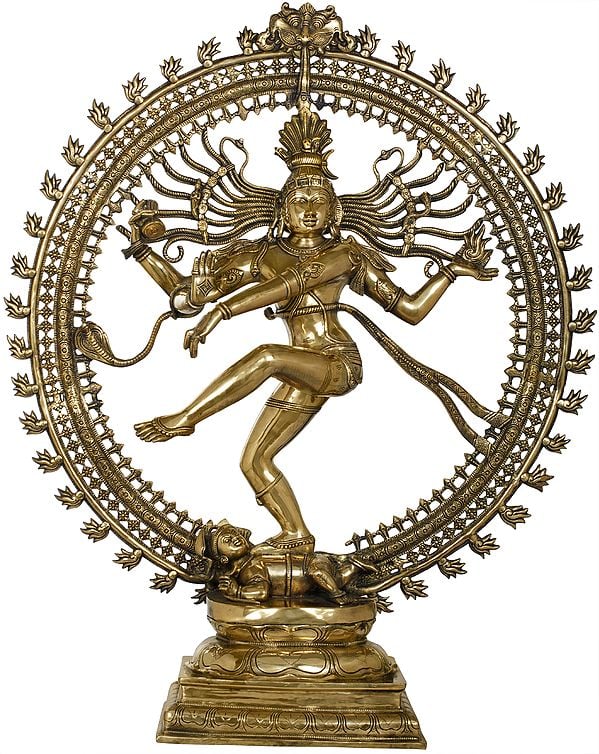 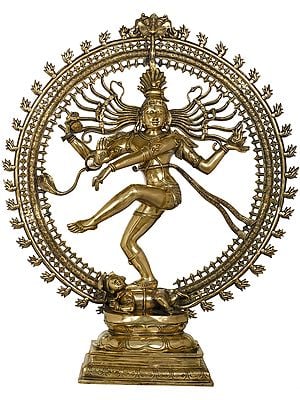 The heavenly Lord of Dance is framed here in a supremely carved multi-layered cosmic Kirtimukha ring of flames, balanced on a bewitching multiple levelled lotus pedestal. Nataraja is the classical depiction of Lord Shiva, who is usually shown as standing on a dwarf demon Apasmara, representing an action of suppression of all kinds of ignorances.

His striking stance and body control identify him as the divine dancer, carrying a Damru and Agni (Fire) in his rear hands that symbolize the celestial sounds and power of destruction respectively, while the anterior hands are fashioned in the iconic mudra of fearlessness.

Garbed in a short dhoti and flying locks dancing towards the left; Shiva’s matted here stand out in fierceness in individual strands interspersed with flowers, conch, moon, serpent and the Ganges river emerging out from the top. The deadly serpent coiled around the right hand represents Shiva’s power of capturing death.

This Tandava dance is a source of movements within the cosmos and a representation of creation and doomsday. The sculptor has put his immense hard work and finite skills to carve this magnified and mesmerizing Nataraja statue, capturing the viewer’s attention.