$2745.00
FREE Delivery
Quantity
Usually ships in 10 days
Notify me when this item is available
The elephant is India's legend. It is a myth and as much a reality. It is simply difficult to think of India without recalling the elephant. Ancient scriptures do not portray the elephant as an independent theme, but her entire past and the body of her entire literature, the sectarian as well as secular, right since the Epic days, echo with a number of elephant legends in one form or the other. The Indus people, as well as the Vedic sages, it seems, did not have a preference for elephant. Excavations at the Indus sites revealed nothing that depicted elephant's link with the Indus man. There obviously could not be a place for an elephant like animal in the type of city life that defined the Indus culture. In the dairy dominated culture of the Vedic days, too, elephant could hardly have a role. The Vedas have mentions of elephant but only as a moody unfriendly animal that unprovoked destroyed ashramas of rishis. The Vedic rishis had cow, horse or even serpent related rituals but they by and large evaded elephant taming or befriending.

By the time of the Puranas, the elephant acquired the status of the highest auspicious beings and in the matter of auspices even excelled the cow, which enjoyed the status of the most sacred of all animals and was worshipped as a deity. The cow was yet the most sacred of all animals but not as auspicious as the elephant. Whatever the related legends, it was largely in consideration of elephant's auspicious bearing that when looking for a head to graft on the torso of Ganesh, the god of auspices, the divinities chose an elephant head. And, after Lord Ganesh, the son of Parvati and Shiva, had his torso transplanted with such head, people began worshipping not only Gajanana, the elephant headed Ganesh, but also the elephant as an animal. It was with the Ganesh legend that the elephant was deified.

Elephant related legends are innumerable. Airavata, the milk white elephant, was one of the fourteen jewels obtained by churning ocean. It was acquired by Indra, the king of gods and ever since has been an inseparable part of his identity and iconography, and what of minor gods, even Lord Vishnu was one of them who envied Indra for his elephant. Airavata was not only his vehicle but also an invaluable asset. Indra realised his folly and also that Krishna was no one else but Vishnu, after he had lifted the mount Govardhana and held it for seven days on his little finger to protect peoples and cows of Vraja from Indra's wrath. The subdued Indra, leaving Airavata at Vrandavana's outskirts, rushed to Krishna to propitiate him, but did not succeed in his efforts. Finally, Airavata came to the rescue of his master. It reached Lord Krishna but before making a prayer bathed the lord of cows by sprinkling on him fresh milk from within it. This so much pleased him that he pardoned Indra for his impertinence.

The mythology of Lakshmi and Vishnu too is not bereft of the legendary elephant. In mythical tradition, Lakshmi even developed an elephant related form known as Gajalakshmi, an epithet she acquired as it were only the elephants that always bathed her by sprinkling water on her. One of the feats, for which Lord Vishnu is best known, relates to rescuing an elephant from a crocodile. The episode, widely known in Indian mythology as Gajendra-moksha, depicts how, when called for help, the benevolent Vishnu rushed and rescued the innocent animal. A zoological miracle, the massive sized animal elephant lives on pure vegetable diet and it is perhaps for such reasons that it has greatly suited the Jain and Buddhist cults. Exactly before Jain Tirthankara Mahavira was born, his mother Trisala perceived in her dream a chain of Airavata type white elephants. The auspicious dream was a precursor of a great divine birth. As the Jain tradition has it, after his Enlightenment, Lord Mahavira, before he entered the Samavasarana, was bathed by elephants. It is almost the same in Buddhist cult. When Mayadevi, the wife of king Suddhodana, the Sakya king of Kapilavastu, conceived Buddha, she dreamt that a baby elephant descended from the sky and, after circumambulating her three times, entered her womb.

Here, these two carved elephants stand with their trunks upraised in a gesture of triumph. These images are believed to be extremely auspicious and often entrances are adorned with such icons. The animals splendidly caparisoned in richly embroidered cloth are decked with jewels including a necklace with hanging bells adorning their necks, and an anklet in each foot. A two-crested crown adorns their heads. A chain-like ornament extends from the caparison and goes the whole way round each posterior, acting as a decorative adornment.

This sculpture was created in the city of Aligarh in the state of Uttar Pradesh. The artist is Shri Vikki Jain. 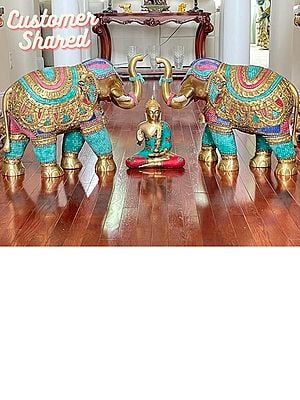 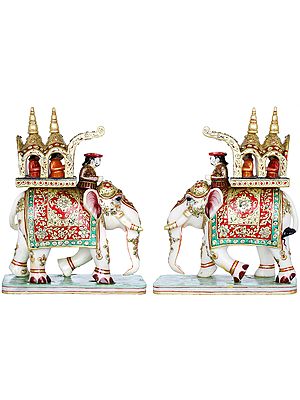 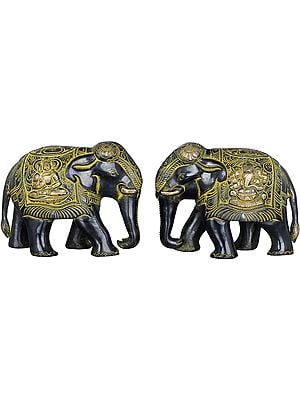 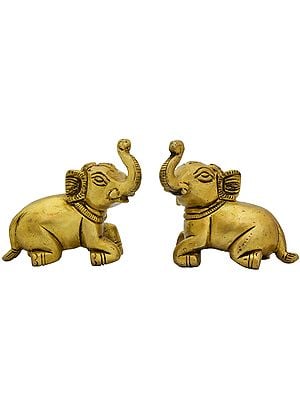 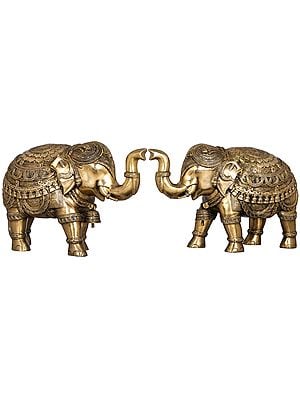 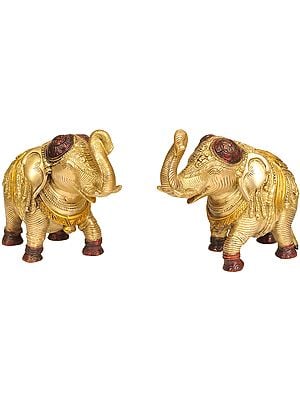 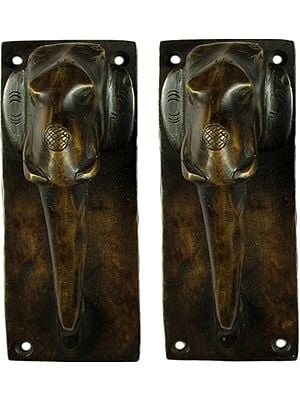 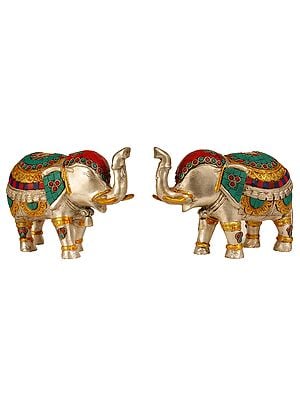 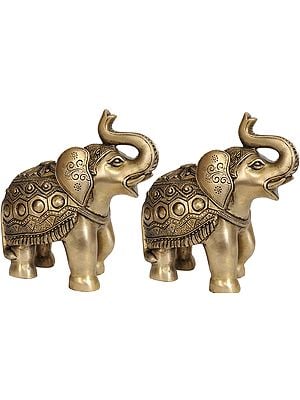 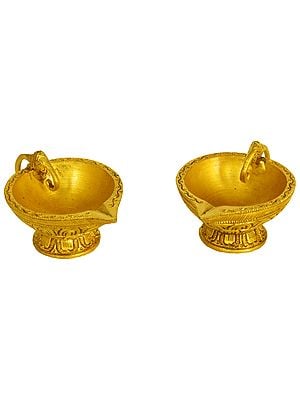 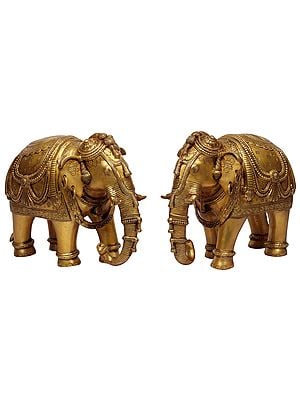 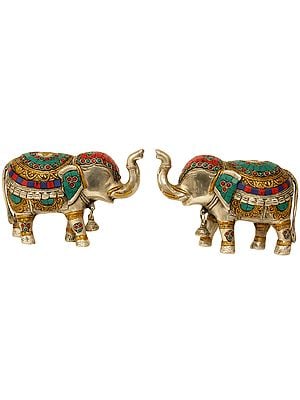 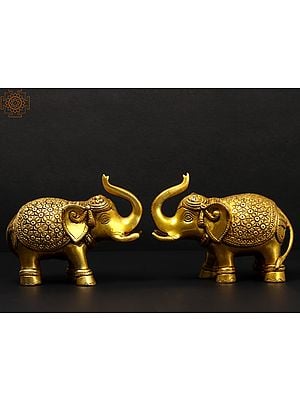 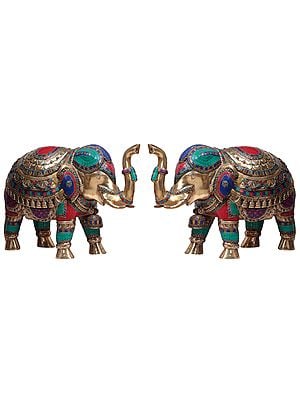 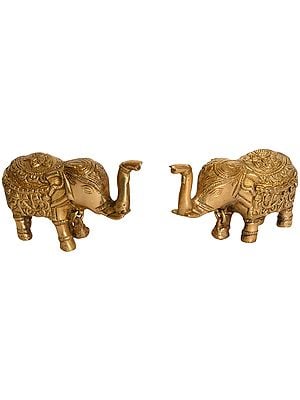