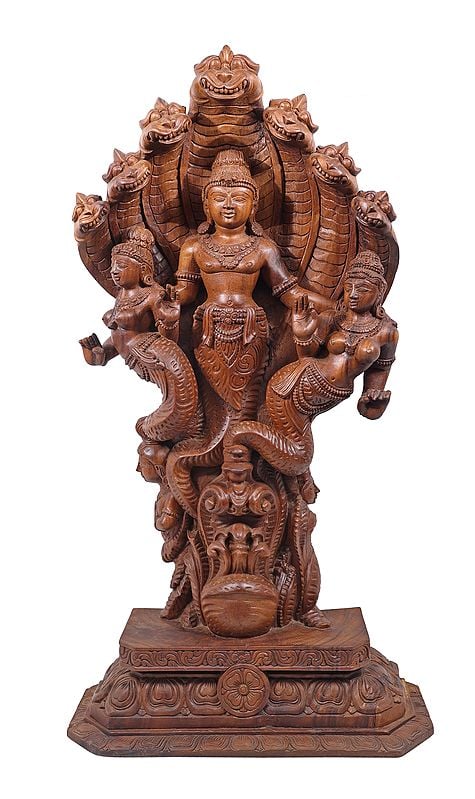 Bhudevi and Sridevi are two separate manifestations of goddess Lakshmi. Sridevi is a representation of the cosmic energy, or Prakriti, whereas Bhudevi symbolizes Mother Earth, life, fertility and a totality of the material world. Bhudevi is also worshipped as the consort of Varaha, the third incarnation of Lord Vishnu. It’s a wooden carved statue with a fine glossy polish on the finished product. It’s a representation of Mahavishnu, or Malayappa Swami, in his half-human half-snake form.

The figure of Sridevi, as is the tradition, is placed on the right-hand side of the central Mahavishnu figure. Bhudevi, on the other hand, stands to the left of the lord. Notice the mirroring of hand-posture of the two goddesses. Bhudevi’s right and Sridevi’s left are held in kataka hasta mudra while their opposite hands display the mudra of gajakarna. The three idols are sheltered by the hoods of the seven-headed Sheshanaga. The entire statue stands upon the traditional rectangular lotus pedestal.

Lord Vishnu is at the centre of the fundamental Hindu trimurti (trinity). Between Lord Brahma who gives birth and Lord Shiva who annihilates, Lord Vishnu is responsible for the preservation of all that has been projected unto our perception till it is subject to annihilation. He is a resident of paraloka (otherworldly or heavenly realm of existence) where He lies in the coils of Sheshanaga, loved and served by His wives, Bhoodevi and Shreedevi.

The Mahavishnu (‘maha’ is Sanskrt for great) composition that you see on this page is an unusual depiction of the aforementioned ensemble. At the centre is the straight-backed figure of the Lord Himself. He is flanked by the curvaceous Bhoodevi and Shreedevi, whom He holds by the nape of the neck with each arm. Interestingly, they both gaze in the same direction and are raising their hands in blessing over the mortal realm. The presence of Sheshanaga pervades this composite iconography. He raises His multitude of hoods over their heads, a Kirtimukham motif where the fangs should be. Below the navel, the bodies of Vishnu and His wives turn into the coils of the naga.

The age-old sculptural tradition of the South is known for its predilection for organic media such as wood. It has left its hallmarks in this contemporary work of art, such as in the presence of the Kirtimukham and the style of the plinth. Besides the perfect symmetry of the lotus petals engraved on it, the simple floral motif on the frontal midline is especially characteristic.