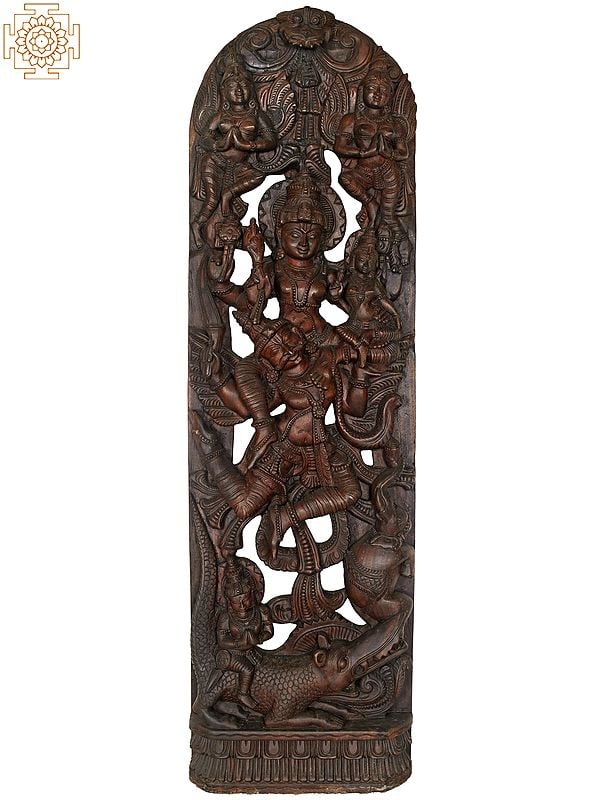 $990.00
FREE Delivery
This item can be backordered
Time required to recreate this artwork
20 to 24 weeks
Advance to be paid now
$198.00 (20%)
Balance to be paid once product is ready
$792.00
Notify me when this item is available
"Cry to the Lord with an intensely yearning heart and you will certainly see Him." (Sri Ramakrishna Paramahansa)

This sculpture narrates a tale from the Bhagvata Purana: The king of elephants, Gajendera, was once sporting in a lake accompanied by his herd. Like a true leader, while they were returning to the shore, Gajendera first allowed his troop to flock out and only then did he himself attempt to venture out of the water body. No sooner had he taken the first step than a crocodile whose peace had been disturbed grabbed one of Gajendera's legs and started dragging him back into the water. However hard he tried, the chief of pachyderms was unable to free himself from the vice-like grip of the alligator. In agony he appealed to his herd to help pull him out. The combined might of the whole group was insufficient to rescue Gajendera from his impending doom. Slowly and steadily, the reptile continued to drag him into the lake. Finally, his herd gave him up for good and retreated to the woods.

Thus deserted, Gajendera appealed to Him who is the last refuge of all - Lord Vishnu. The deity heard the fervent appeals of His devotee and mounting the half-man, half-avian vehicle Garuda, rushed to his defence. With one throw of His chakra (discus), Vishnu annihilated the villain.

Here we see Lord Vishnu seated regally and majestically on the shoulders of a moustached Garuda. The extended left thigh on which is seated His consort Lakshmi is supported by Garuda's hand. Garuda's right leg harmonizes the compositional symmetry, balancing out the crocodile's long curving tail while his left leg does the same for the alligator's sinister snout gripping the helpless elephant in its merciless fangs. The desperate pachyderm seems to issue out from the mouth of the unrelenting reptile, such is the fluidity of forms depicted in this dynamic atmosphere.

Indeed, the sculptor Shri Sengottuvel seems particularly adept at carving out figures in motion and the artwork is dominated by the vigorous action which finally culminated in the emancipation of Gajendera both in the physical and spiritual sense (not only was he saved from a gory death but Vishnu also carried him away to his divine abode Vaikuntha).

At the apex of the sculpture can be seen the 'Kirtimukha,' which is a universally revered auspicious symbol. Next can be seen two celestial creatures with wings venerating the divine couple. At the bottom panel are two simha-vyalas (composite lions), who traditionally protect the sacred structures of South India.

This sculpture was carved from Vengai wood which has traditionally been the medium for carving temple artworks. It was created in Thammapatty (district Salem) in Tamil Nadu. The sculptor is Sengottuvel.

Vishnu, In All His Glory

Vishnu, In His Own Words

The Book of Vishnu

Vishnu with Bhu and Sri

to all international destinations within 3 to 5 days, fully insured.
Post a Query
Add a review